Burning Man: The Musical is now a feature film!

Burning Man: The Musical had its world premiere on Broadway On Demand and Streaming Musicals on August 27, 2021. Watch the film now.

After working with the composer Gene Back for 6 years, we’re excited to announce that our satirical musical comedy has been turned into a feature film. It was shot on a soundstage with 10 actors during April, 2021. Watch the behind-the-scenes on the making of the film on YouTube.

To learn more about the background on this project, read my interview with Oakland Magazine.

Popular posts from this blog 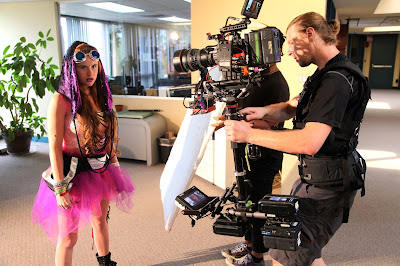 Molly Gallagher performing as Sparkle Pony Molly Gallagher plays the character Sparkle Pony in Burning Man: The Musical . We caught up with her to discuss her experience on the first video shoot, her theater training at NYU, and how her character is a Disney princess meets a badass ninja warrior. You can watch her and others perform the opening to Burning Man: The Musical live at the 10-minute musical theater festival Sound Bites on January 18, 2015 in New York City. - Burning Man: The Musical team How did you first get involved with Burning Man: The Musical? Matt Werner (the writer) saw me in other videos on YouTube and thought I would be good for this project so he asked me to play Sparkle Pony! I got extremely lucky. How did you prepare to sing all of the female vocals on the opening track? What was that experience like? I was first sent a recording of the composer singing the song and a lyrics sheet. I listened to it a million times before I went to record. When I g
Read more

December 27, 2011
1. Secret Wars Part I by the Last Empreror One of the most imaginative rap songs ever composed, this song has comic book characters (like Spiderman and the Hulk) facing off in battles against MCs like KRS-One and Lauren Hill. The Last Emperor's track showcases his creativity in how he matches the personality of the comic book characters (like Dr. Octopus vs. Busta Rhymes). He also creates an enjoyable song, flowing effortlessly for 5 and a half minutes with a complex multi-syllabic rhyme scheme with lines like "Rhymes by the bunches//Bums get dirtier than Middle Eastern dungeons//Ready to settle this like detective Columbo and his hunches." The Last Emperor is an underground legend and lyricist to be reckoned with. He has other tracks worth checking out like Monolith . 2. White & Nerdy by Weird Al Perhaps the most popular nerdy rap of all time with
Read more